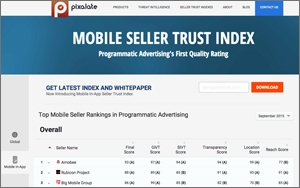 Ad tech firm Pixalate, known for fraud prevention in the programmatic space, has announced the launch of a monthly in-app mobile Seller Trust Index (MSTI). The index is intended to provide clarity on how supply quality should be evaluated.

In addition to ranking the most trustworthy sellers, Pixalate also found four other key issues affecting the quality of in-app inventory. Ten sellers own 80% of the inventory; the device ID is missing 50% of the time; only 30% of inventory has location data, and of that 30% only 60% had accurate location data; and most fraud apparently originates in data centers, indicating that there are hosted machines running highly customized mobile app simulators.

So far, the industry’s biggest hang-up for fraud has been the lack of standardized quality measurement.

eMarketer predicts that mobile ad spend will reach nearly $29 billion and account for 49% of digital ad spend in the United States this year. Without standardized quality measurement and an ever-growing volume of inventory being bought and sold in real-time, many are aware of the growing opacity of programmatic buying and selling.

“Supply quality measurement in-app mobile ads has become a minefield for buyers. Our study revealed that more than 38 percent of in-app mobile ad inventory is fraudulent leaving buyers in the dark on which ad exchanges are trustworthy,” stated Pixalate’s CEO, Jalal Nasir.

Pixalate released the Global Seller Trust Index in December 2014 for display and mobile Web advertising, but the new MSTI is specific to in-app inventory.