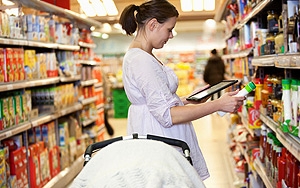 Online grocery shoppers may not be who marketers think they are. A new study from consulting firm A.T. Kearney reports that more than one-third of primary grocery shoppers bought food online last year, with e-commerce sales growing at five to six times faster than in-store growth.

And while much of the gains are coming from predictable segments, including Gen Y, urbanites and those earning $75,000 or more per year, the study found solid gains in every segment. One-quarter of those 65 and older have purchased groceries online, and 32% of those between 55 and 64.

The report is based on responses from more than1,300 primary grocery shoppers; some 90% are female, with an average household size of 2.9 people.

But it revealed persistent barriers too, including people’s perception that they will get less-than-fresh perishables. Personal care products are the most purchased items, with 53% buying those items online in the last six months, followed by beauty (52%) and packaged foods (31%). But fewer than 15% had purchased meat, seafood, produce or other fresh foods.

Cost is also still a concern, with 58% of respondents saying they would shop more if costs were comparable to what they pay in stores, and 58% say they would do so if shipping or pickup was either low-cost or free.

But they are happy to pony up for convenience, with 80% willing to pay more for home delivery. And they are eager for innovative options, like the ability to read and write reviews, have stores make suggestions based on their purchase history or quickly reorder items.

The company suggests that stores can make their ecommerce options more tempting by creating better value propositions and segmenting likely targets more effectively. Retailers also need to find more innovative ways to engage shoppers, “creating a personal, integrated experience for every shopper, regardless of where or when they shop or what device they are using.”

Trussell writes the announcement is about Wal-Mart trying to catch up with competitors like Amazon, Target, Costco and dollar stores, and "won’t  necessarily drive meaningful returns ahead. And while he believes the new initiatives are positive steps, “we don’t see competitors ceding much share (if any).”