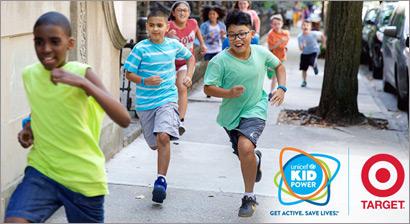 Just in time for the holidays, Target is teaming up with UNICEF for a cause-related first: A wearable device that will both fight obesity in American kids, and help feed malnourished children in developing countries.

Called UNICEF Kid Power, Target calls it the “first wearable for good,” and will sell the activity-tracking device sells for $39.99. Paired with an app, the wrist bands encourage kids to move more, then convert their points into food packets distributed around the world. The more activity and challenge points they accumulate, the more lives they save. (A Web site allows them to track the program’s progress.)

Target has wanted to come up with a program that both supported healthier lifestyles, but also builds on its existing programs in education and hunger relief “to focus on youth wellness, both in and out of school, and engage a whole new generation in being global citizens,” says Laysha Ward, Target’s chief corporate social responsibility officer, in its announcement.

The Minneapolis-based retailer and UNICEF are already adding star power, including spokesperson P!nk. And the device enables kids to explore various missions and challenges, hosted by such athletes as Boston Red Sox David Ortiz, who introduces kids to children in Africa’s Burkina Faso, and women’s basketball star Maya Moore, who leads the video expedition to Haiti.

And beginning next year, Disney, “Star Wars: Force for Change” and local supporters will get the wearables into high-need schools, along with classroom tablets for syncing and tracking progress, and curriculum and content focusing on malnutrition and global citizenship.

While pre-orders are available now, the devices are scheduled to go on sale at Target.com in late November and in stores in 2016. They’ll be offered in four colors — blue, orange, and two special “Star Wars: Force” for Change editions.

UNICEF, meanwhile, is also making a big splash this month linking its annual Trick-or-Treat for UNICEF appeal with the upcoming “The Peanuts Movie.” Charlie Brown and friends star in print, online and broadcast PSAs.