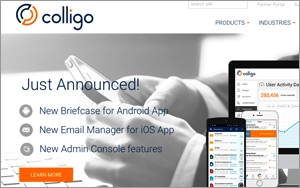 The interchangeable use of personal and business email accounts is a major data concern, but Colligo hopes to bridge the divide between employees and IT departments through more secure, cross-device email management and data synchronization.

Colligo says the three new Colligo apps, currently in Beta testing, provide a solution to the challenges of business security presented by Io, and were created to integrate with the same devices employees use every day, while also still providing Enterprise-level risk management, compliance, and data loss prevention.

Barry Jinks, President and CEO of Colligo, says employees look to apps to access data from any device, "but along with that comes heightened security and governance concerns that are creating unprecedented challenges for IT.” The apps are managed and secured in the cloud on the Colligo Console platform, which is itself built on Microsoft Azure.