The company wants to power all 14 of its data centers with renewable energy. Today, 37% of the energy for Google's data centers comes from renewable sources. It estimates the increase now totals up to 2 gigawatts, the equivalent to taking nearly 1 million cars off the road or powering roughly two million homes.

The power represents a range of locations and technologies, from a wind farm in Västernorrland County, Sweden, to 80 megawatts of solar plant in Chile. The contracts range from 10 year to 20 years and provide projects with the financial certainty and scale required to build wind and solar facilities. In a post,

Urs Hölzle, SVP of technical infrastructure at Google, in a post explains how the project will help to minimize environmental impact of its services such as search and cloud storage.

Along with Google, Amazon, Microsoft, Facebook and others have vowed to run on renewable energy. Apple has been investing in solar farms, Microsoft buying wind energy, and IBM and Salesforce bought their own energy for data centers or use green resources. 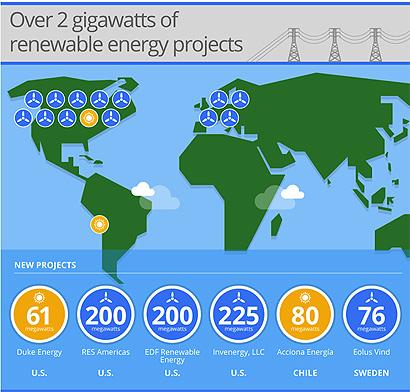