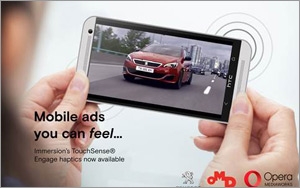 Now Peugeot, a French car brand, is launching a campaign in the UK that mimics the revving and acceleration of a car engine by vibrating on queue.

The campaign will run throughout December; it features Peugeot’s new 308 GTi model car and is exclusive to Android phones.

Vibration/touch technology being incorporated into ads is a very recent development, something of a novelty in the ad world.

The sample size is not quite large enough to draw conclusions from regarding haptic tech incorporated into ad campaigns, but it’s a safe bet to say that marketers and advertisers will continue to experiment with the capabilities of various devices to develop a more immersive ad experience.

By approaching mobile devices as potential multi-sensory experiences beyond just sight and sound, marketers can take advantage of mobile’s inherent differences and capitalize on them.

Some may find the feature more interruptive than immersive though. Most consumers still despise mobile advertising in all it’s various shapes and flavors, but it’s still early days for the technology, and data from haptic tech could be the next step towards better mobile advertising.

A few weeks ago, Stoli Vodka also launched an ad campaign utilizing a phone’s vibration functions to incorporate a sense of touch into an ad.
ad campaign, automotive, marketing, mobile
Next story loading