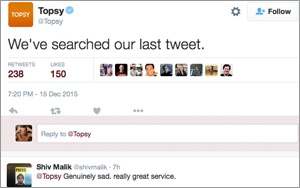 Apple's growing strength in search services could have prompted the decision to shut down Topsy Labs' search and social media analytics tool to measure Twitter data. The Cupertino, Calif. company purchased the technology for more than $200 million in 2013. A tweet on Topsy's official Twitter page explains "We've searched our last tweet."

Topsy is one of a couple of services that gained early access to Twitter's full data set. It was a popular tool, but following Apple's acquisition, many users abandoned the service.

Although some are saying the closure is a bit abrupt, it seems Topsy filled Apple's learning curve for search. At the time of the acquisition, Topsy indexed about 425 billion pieces of content from photos to linked pages. The platform analyzed the amount of times that Twitter users cite a specific piece of content or topic, and it claimed that mining tweets helped to track consumer sentiment.

The U.S. Patent and Trademark Office Web site for search-related Apple filings lists more than a dozen patents either granted or pending applications just for December 2015. One patent updated on Dec. 3 focuses on a user interface for searching. The method relates to search techniques.

One of the more interesting patents that focuses on local search describes searching across multi-domains on a computing device. It details systems and methods for improving search results returned to a user from one or more domains, using query features learned locally on the user's device.