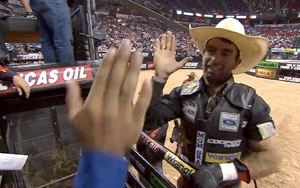 The sport’s Built Ford Tough series is also back in Madison Square Garden in the second week of January for the 10th year. PBR events — the competition in New York is the “Monster Energy Buck-Off at the Garden” — is a bit like a cross between Motocross racing and boxing; it's not your grandma's rodeo. The sport is fast-moving and dangerous. If there's a first mover in American extreme sports, it's fair to say bull riding would be it. And PBR has cut the fat with a focus on the competition and little down time, as riders come out of the chute in regular intervals, aiming to hang on (for dear life) for eight seconds, because anything less is a zero score. Once they reach the eight-second mark, they are judged on that ride.

PBR CEO Sean Gleason tells Marketing Daily that one of the biggest challenges PBR faces is breaking down perceptions about who and what the sport is. He says people tend to think “rodeo,” the county fair-styled event with bull riding, lassoing, clowns and cotton candy. “We are bull riding only; we take the most exciting sport and wrap it in a rock concert environment with state-of-the-art production, lights and sounds, and pyro,” he says. “So we are delivering a highly entertaining product. It's a formula that works.”

The Built Ford Tough Series tour comprises 26 stops and a five-day world final, televised on CBS. The New York stop is one of the four majors in the series, in which the top 35 riders compete week in and week out, ending in Vegas at the world finals.

The sport has grown rapidly, and top athletes (and the bulls are also considered athletes) make upwards of $6 million per year. The top bull made half that last year (though it's hard to imagine how a bull spends that kind of money). The Built Ford Tough Series 2015 event in Tucson drew 2.3 million viewers, per PBR, which said that the draw was the highest for a PBR event in 4 years and more than that day’s NASCAR Sprint Cup Series race. The Built Ford Tough events at Madison Square Garden are among the biggest attendance generators of all the PBR events, according to Gleason, who says that the three-day event garners about the same numbers as the one-day event in Cowboys Stadium -- about 35,000 people. Other PBR venues are in markets like Anaheim, California; Little Rock, Arkansas; Chicago, Oklahoma, and Colorado.

Matt McDonnell, Ford truck experiential marketing manager, tells Marketing Daily that the “Built Ford Tough” series is an opportunity to showcase F-Series trucks. Besides activation and branding on site at PBR events, including truck displays and advertising, a big part of the association is a campaign with a robust promotional aspect. “For the last two years, we have focused on a 'Good Works' campaign showcasing truck owners around the country giving back to their communities,” he says. “We solicited stories, and covered some of them in a 90-second format, and show those in arenas.”

The 90-second features are also shown on CBS coverage of PBR. "At a high level, these are feel-good stories about Ford values. And it ladders back to a promotional campaign giving away a new F-150 and VIP trip to the World Finals. We take a holistic approach to this partnership; we don't pull just one lever, we collaborate on several levels. And PBR are idea guys, so they bring a lot to us.” Other key partners include the City of Las Vegas, Cooper Tires, Monster, Jack Daniels, Stanley, Dickies, Wrangler, and Caterpillar, among 22 corporate partners.

PBR is in five countries including Brazil, Canada, Mexico, and Australia, and will have events in China, per Gleason. Marketing is focused on PR, social, digital and projects and broadcasts that are not the core competition. One of those is "Danger on the Dirt," a documentary on what pro riders go through to train and compete, and recover, airing Dec. 27 on CBS, after NFL broadcasts.