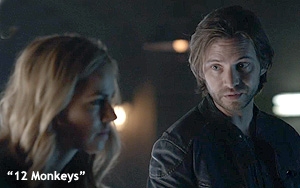 NBCU cable network Syfy is starting up Syfy Labs, an innovation lab for creating multiplatform content and experiences for existing and emerging platforms.

Syfy Labs will work on a wide variety of efforts -- virtual reality, 3D printing, second-screen experiences and Internet of Things integrations -- merging technologies into storytelling of the network’s original programming, such as “The Expanse,” “The Magicians” and “12 Monkeys.”

The network made the announcement on the eve of the Consumer Electronics Show in Las Vegas, where attendees can test some of its new efforts.

Syfy Labs will build upon its deal with Philips Hue where consumers can use home lighting to create custom built “lighting tracks” for TV shows. This will be available in 2016 for the entire first season of “The Expanse,” season 2 of “12 Monkeys” and the summer’s “Sharknado 4”.

In addition, Syfy Labs is partnering with MakerBot to offer printable files of exclusive 3D models via MakerBot’s Thingiverse. For example, models will include the ships -- The Knight and The Canterbury -- from new TV series “The Expanse.”

Matthew Chiavelli, SVP of Syfy Digital, says the launch of Syfy Labs "formalizes our commitment to giving our viewers new ways to experience our rich content in a variety of exciting ways, on many different platforms.”