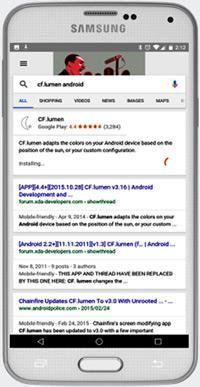 Google has begun to test a feature that enables mobile users to download apps from search results in Google apps without being rerouted to the PlayStore.

Until now, Google has displayed links to the PlayStore on Android and iOS App Store on mobile Safari for iPhone users. The move is significant for retailers and brands with ecommerce sites that are looking to drive and track traffic and sales through applications rather than the Web.

Google's most recent test serves up only on Android phones. When it's a brand, the feature appears at the top of the query with an install button, followed by a direct link to the site, telephone numbers, directions, foot traffic during popular times on specific days, and Twitter results.

It appears 2016 will become the year of the app in search for advertising and marketing after a year of testing and fine-tuning. In November 2015, Google began testing the ability to stream in app without downloading it in search results, an option made possible through cloud-based technology.

Bing also began experimenting with its app in November 2015 by eliminating advertisements, saying that it wanted to test the user experience.

Google's focus on apps also made it possible to link the apps Google Camera and Google Photos installed on any one device, per one report. It makes photos the default image preview tool. A card will offer the user the ability to link with Google Camera to take the photo.

Some 32.6% of U.S. mobile device users prefer to use both a mobile app and a mobile browser at different times, per eMarketer citing a December 2015 study from mobile app search company Quixey.

More than 19% of respondents admit to preferring a mobile browser, and 23.1% of mobile device users said they favored mobile apps. Some 24.7% said they had no preference.