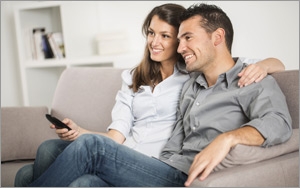 The strong TV scatter market advertising of the fourth quarter of 2015 continues into the current first-quarter 2016 period, after years of weak TV advertising buying.

As a result, MoffettNathanson Research expects total national TV advertising activity for the fourth quarter of 2015 to rise 4.3% to $10.8 billion for major broadcast and cable network groups.

CBS is expected to rise 5.6% for the fourth quarter to $1.29 billion in domestic national TV advertising revenues with NBC climbing 5.0% -- including its TV stations -- to $1.74 billion. Both media companies have strong NFL programming packages.

Fox, which has a big NFL franchise with the NFC Conference games on Sunday afternoon, will also see 3% growth to $976 million. Analysts cite big advertising gains from “Empire,” which started its second season in the fall. Its initial year began in January 2015.

AMC Networks will see the best network group results -- as a percentage -- up 15% to $274 million, much of this coming from “The Walking Dead” and its spin off “Fear The Walking Dead.” Disney cable networks, specifically ESPN, will climb 14.3% to $1.4 billion. It expects positive results from the sports network’s College Football Playoffs, although the games produce lower than expected TV viewership.

MoffettNathanson expects continued struggles with Viacom networks -- down 5.5% to $1.01 billion.

Although TV ratings -- broadcast and cable -- continue to generally suffer, media analyst Michael Nathanson writes: “We expect media companies to benefit from a continuation in national advertising strength, due to a robust scatter market that is offsetting some pockets of continued weak rating trends.”