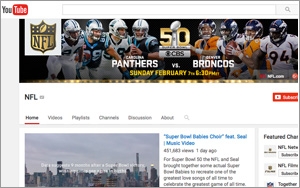 Super Bowl 2016 content will generate thousands of searches and more than two billion views in aggregate, per estimates -- not just advertisements, but all related content, forecasts ZEFR, a video ID tech company that analyzes why people watch and engage with the clips.

The views are good for YouTube's revenue strategy, which continues to see significant growth rates driven by video advertising across TrueView and Google Preferred, according to Alphabet's fourth-quarter 2015 earnings report released Monday. Network revenue was $4.1 billion -- up 7% year-on-year and up 12% sequentially, reflecting strong growth of programmatic media buying.

Of the more than 130,000 re-uploads this year during pre-Super Bowl activity, Budweiser, McDonald's, Doritos and Snickers are the top re-uploaded brands, per ZEFR.

Expect trends to change this year. Rather than see a lot of user-generated highlights, the National Football League will begin broadcasting their own highlights on YouTube in real time, says Tom Galido, head of data and insights at ZEFR. He says the NFL has begun to understand the value of content and launched their own channel on YouTube this year. "Fans will watch the last play on the NFL official YouTube channel," he says.

"For women, it's more about finding videos on how to do their makeup, so they look good in a team jersey," he says. "Game Day brings out more searches and reactions around commercials."

The how-to videos are popular, but 33% of all Super Bowl-fan related views on YouTube were ads in 2015, about 660 million views of Super Bowl ads that are uploaded by fans, rather than brands. Of which 33% were views of advertisements, and 27% halftime performances.

Some 77.1% of consumers surveyed considered Super Bowl 2015 ads a form of entertainment, according to eMarketer, citing numbers from the National Retail Federation.

Despite all the searches and views on YouTube, eMarketer projects that digital video viewers will not outnumber TV viewers in the near future.

This year, 205.7 million American adults will watch cable or satellite TV, compared with 172.1 million adults who will watch digital video, including only short-form content.