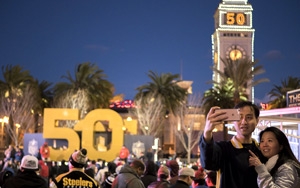 Plenty Super Bowl viewing -- like other sports viewing -- is out of the home, or at least at other people’s homes. This seems to be a growing trend.

Over the past five years, Super Bowl viewing from consumers who do not live in the primary rating household (guests, or short-term visitors) contributes about 10% to the total ratings.

For the past five years, on average, Nielsen calculates that this comes to roughly 11 million viewers.

For the NFL -- as the regular season progressed -- Nielsen says out-of-home (OOH) viewing generally is growing. For example, the NFL season on Fox for OOH rose to the highest levels by week 16, the last week of the season. The average audience out-of-home lift was 23.6% in viewers age 6 and older.

The first week of the season this level was at 19.7%, dipping down to 17.3% before rising in the latter half of the season.

Out-of-home viewing should be seen in the context of overall higher sports programming and viewing.