PSE Gets Animated In New Campaign From DNA 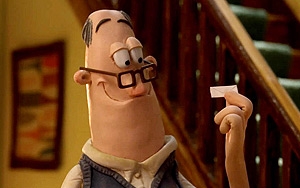 It can be challenging to capture people's attention about their utility bills, which is why Puget Sound Energy and Seattle-based DNA are using animation in the client’s new "Happy To Help" ad campaign.

Every element of the campaign – from the characters to the pictures on their walls to the coins that pour from the refrigerator – was handmade by DNA and Portland, Ore.-based animation company House Special.

And every detail was considered to ensure that the characters and their homes captured the authenticity of the Puget Sound region, say agency executives.

The campaign includes three television spots. “The Incredible Bill Shrinking Light Bulb" ad features a clay animated customer who turns on a lamp to look at bills on a table and watches his PSE energy bill shrink.

The second spot, “Cold Hard Cash,” shows a clay animated mom, mid-workout, going to her refrigerator to fill her glass and out pours money instead of water, showing the money that she saved by using her energy efficient refrigerator.

The third ad is based on the fact that in the rainy Pacific Northwest climate, power outages are an ongoing concern. The ad educates customers about reporting power outages via the PSE mobile app.

PSE intends to use these characters in ongoing promotions throughout the year and with internal communications among PSE employees.

“The characters are whimsical depictions of customers in the Pacific Northwest,” stated Kammie McArthur, creative director at DNA. “Clay animation allows us to exaggerate situations and emotions to drive home the idea that PSE is looking out for customers; and does it in a fun and memorable way.”

ad campaign, advertising, agency, energy
1 comment about "PSE Gets Animated In New Campaign From DNA".
Check to receive email when comments are posted.
Next story loading