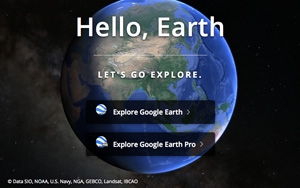 Google began to quietly shutter Google Earth Enterprise in the U.S. along with some of the most important business features for Google Earth Pro such as data for parcels, demographics, and traffic counts. By the end of January it shutdown Parcel (APN) Search, sending those relying on the data for daily business requirements scrambling to find alternatives.

The decision, which Google would say was brought on by consumer behavior, continues to alter the future of a market segment.

Google isn't alone. Microsoft killed MapPoint last year. As more consumers leave their desktop for mobile phones, both companies, along with Apple, have been building up their mobile mapping applications, changing the business model, and shuttering data services and tools for desktop.

Now some believe that Google and Microsoft have turned their attention away from business mapping technology and toward mapping services that generate advertising revenue.

Despite the vanishing act brought on by the move to mobile, these traditional desktop business mapping tools that provided the ability to search on assessor parcel numbers (APN) remain popular, especially among industries that require easy-to-use software sitting behind their firewall. The model continues to change, along with the range of options.

Google's tools were affordable, flexible, powerful, and had tangible business benefits, according to Stewart Berry, director of product management for mapping software at Caliper, which develops geographic information systems (GIS) and transportation software. "These products have gone away," he says. "All that's left are APIs, with limited functionality, but at a higher cost."

Parcel boundaries are viewable using the Google Maps API, which provides the ability to style the lines to make them more prominent. Along with the API came new tools, but these are for developers, not consumers of business analysts, per Berry. "When you kill a desktop product and don't offer a comparable cloud product, you leave your customers high and dry."

While Google points to alternatives for parcel data like the Google Maps API, Berry says users cannot search by the parcel ID. The alternatives are for developers and have costs per interaction.

Having the ability to search by parcel number remains a huge issue for some industries such as real estate and construction. "I see the frustration in the removal of the APN layers, so I will offer what my company uses," writes Eric Maturino, an engineer offering advice in the Google Maps and Earth help form. Maturino works at a photovoltaic construction company running through permits and other services multiple times per week.

"At the price of $400 per county, this can be ridiculous, seeing at times we operate in six different counties a month," Maturino explains, suggesting a Web-based service called Parcel Quest Navigator.

The $1,800 annual cost may be steep, but it avoids the hassle of repeatedly buying parcel information and navigating the search. It is a drop in the bucket, he writes. Parcels and addresses are searchable if you know the number.