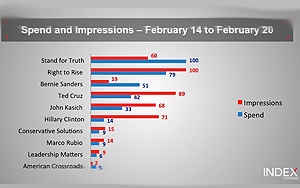 A study of the programmatic landscape in South Carolina and Nevada shows that presidential campaigns and super PACs have been using a variety of strategies, resulting in significant differences in total impressions and average clear prices.

Index Exchange conducted a study of political ads placed through their programmatic platform on over 30,000 publisher properties. In the week leading up the GOP South Carolina primary and the Democratic Nevada caucuses, Right to Rise, Jeb Bush’s Super PAC, garnered the highest number of impressions among both parties. Ted Cruz’s Super PAC Stand for Truth spent the most overall.

Sen. Bernie Sanders spent significantly more through the platform than Hillary Clinton did, but fell far short of the total impressions the former Secretary of State attained.

When it comes to pricing, the landscape takes shape.

On the Democratic side, Bernie Sanders paid a hefty CPM averaging $15.56. This is compared to an average of $1.13 for ads placed by Hillary Clinton.

Sanders was clearly vying for a more specific and in-demand target group than the Clinton campaign. This most likely included particular minority and age groups in both South Carolina and Nevada.

African Americans make up a big portion of Democratic voters in South Carolina, a demographic in which Sanders heavily trails Clinton. Nevada is considered the first Hispanic test and Sanders looks to have done relatively well with that demographic. He claimed to have won among Hispanic voters, but that stat has been questioned in light of scant polling.

Results in South Carolina are yet to come for the Democrats. With Sanders’ high clearing prices, we may see a shift in support within certain demographic groups if his message resonates. Hillary Clinton, with a strong African American support base, continues to reach as many potential voters as possible with a broader approach.