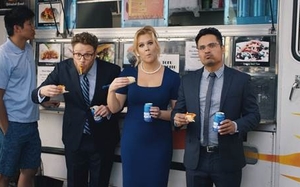 The duo, who appeared in another Bud Light spot during the Super Bowl, were joined by Michael Peña in the 30-second spot, called “Food Truck.”

Similar to the first Bud Light Party spot that aired during the Super Bowl and “Security,” “Food Truck” touches upon inclusivity by highlighting all the delicious diversity you find at food trucks. #BudLightParty members Seth, Amy and Michael visit a food truck park and point out how the food selection mirrors the makeup of our nation – from a Korean taco of togetherness to a gumbo of coexistence.

Bud Light’s premise is that it is America's most inclusive beer, bringing people together from all walks of life -- in celebration of America being a melting pot of people, cultures and backgrounds from all over the world.

The brand aims to bring people together, or fun over a beer, says Alexander Lambrecht, vice president, Bud Light.

“Right now, during the Oscars, there is nothing more timely than the conversation around diversity and inclusion,” Lambrecht says in a release. “Our newest spot from The Bud Light Party brings our message of inclusivity, humor and of course great beer to the world.”

Lambrecht is referencing recent criticisms that there is not enough diversity in Oscar award nominees, nor in the characters portrayed in movies in general.

The Bud Light Party is the first campaign to bring to life Bud Light’s new “Raise One to Right Now” tagline, and aims to provide a unique and light-hearted Bud Light perspective on timely cultural moments.