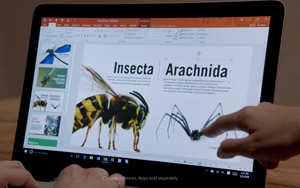 A series of ads from Microsoft that ran on television Sunday before the Oscars continues a long-standing rivalry with Apple that began in 2006 with "Get a Mac," featuring John Hodgman as a PC and Justin Long as a Mac.

Initially, Apple's ads highlighted how the business PC could not do the same new tasks as the playful Mac, such as easily edit videos. This time Microsoft's one-upmanship focused on emerging technologies, from voice search through Cortana, Microsoft's Bing-powered virtual assistant in Windows 10, to facial recognition that allows the user to log in to their PC.

The spots end with the tagline, "Windows 10 PCs do more." Each ad calls out something the Mac doesn't have or can't do. Some focus on Cortana, while others on the touch screen or facial recognition as a security log-on feature. The slight, yet clear signal, Microsoft sends continues to get more aggressive with each Windows 10 advertisement.

The quirky ads began airing on television during E!'s coverage of the Oscars' red carpet.

The Bug Chicks encourage kids to overcome their fears about science and encourage them to explore the natural world. They focus on teaching kids about the world of insects, spiders and their relatives and use them as a vehicle to talk about other topics like educational potential and career options.

Earlier this month, Bing created and uploaded a video to its YouTube channel thanking its best customers of its search engine for using Bing.