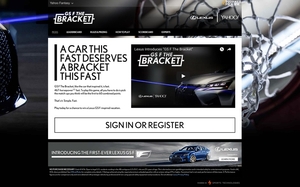 Lexus is launching a campaign on Yahoo Sports to connect with basketball fans via the 2016 Men’s College Basketball Tournament.

“GS F The Bracket,” a custom Lexus branded game, asks fans to pick which games will reach a combined 60 points the fastest for an opportunity to win a GS F-inspired luxury vacation.

This is the first time Lexus has created a game around a major sporting event, says Lexus Media Manager MaryJane Kroll.

“We had the idea to create a bracket experience built on speed and inspired by the GS F -- a 467-horsepower high-performance sedan,” Kroll tells Marketing Daily. “Since Yahoo Sports is one of the most popular destinations for basketball fans to complete their tournament bracket, they were a natural choice.”

Every year, Yahoo Sports is the ultimate destination for millions of sports fans during the Men’s College Basketball Tournament. As a sponsor of Yahoo Sports’ Tourney Pick'em, the digital campaign from Lexus AOR Team One includes display ads driving to “GS F The Bracket” game, pre-roll video ads and branded integrations, and native ad placements targeted to the GS F audience. As part of this, Lexus will be integrated within the Tourney Bracket Live show on Yahoo Sports.

To sign up for “GS F The Bracket,” fans can visit GSFtheBracket.com beginning March 13. Each round, players can select which matchup will reach a combined 60 points the fastest. Fans are encouraged to make their picks for each round but can join the game at any point before April 4, 2016.

Separately, Opera Mediaworks-enabled Android mobile apps and Immersion Corporation, a developer and licensor of haptic technology, are partnering with Team One to launch a mobile ad campaign for the Lexus GS F enhanced with Immersion’s TouchSense technology.

Haptics technology brings sight, sound, motion and feeling to the mobile user. Users will feel the power of the GS F as the phone vibrates during action moments while the video plays.