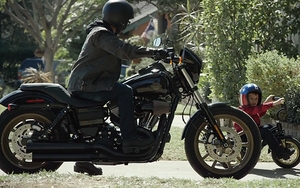 Harley-Davidson is breaking a global campaign Thursday during the opening round of the NCAA men’s college basketball tournament.

This is the first time the company has debuted a new campaign during March Madness, says Dino Bernacchi, Harley-Davidson U.S. marketing communications director.

“It is a premier media property during the start of our key selling season, and it appeals to a wide audience here in the U.S.,” Bernacchi tells Marketing Daily.

The spot will run through the “Elite 8” round of the tournament and then roll out across other regions and markets through various marketing channels, including South by Southwest and via H-D’s UFC partnership.  The effort also will include print and online media, enthusiast and lifestyle media outreach, social media activations using #LiveYourLegend, direct marketing, and retail promotions.

The company has increased its investment this year in customer-facing marketing by 65% above 2015 levels to drive demand for its products, Bernacchi says.

“This campaign is one part of that increased investment intended to increase product and brand awareness and grow the sport of motorcycling in the U.S.,” he says.

Co-developed this campaign with Minneapolis-based Wolfes, LLC., the campaign is a call-to-action to inspire a new generation of riders to invest in experiences now that will build a richer legacy for themselves and those around them, he says.

“This universal truth transcends age, gender and cultural boundaries, so there’s not one target for the campaign,” Bernacchi adds.

Themed “Live Your Legend,”  the campaign shows how a new Harley-Davidson motorcycle can enable riders to create deeper bonds and share richer experiences, allowing them to live their own legend.

The debut spot, “One Day,” features the new Harley-Davidson Low RiderS motorcycle and focuses on the bond shared between a father and his young son.  Upcoming spots include snapshots of life-enriching moments, as well as the unique and unforgettable bonds of friendship that are developed by riding Harley-Davidson motorcycles.

Along with the Screamin’ Eagle Twin Cam 110-powered Low Rider S, the campaign will showcase a variety of new and recently launched Harley-Davidson motorcycles including the Street Glide Special with Project Rushmore features, Forty-Eight, Iron 883 and the Street motorcycles.