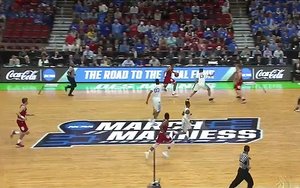 After last year’s ratings blowout — largely due to a number of one-point games right at the top of the tournament and two extremely popular teams competing in the final four — this year’s March Madness tournament has seen a decline in viewership.

That’s not surprising, as viewership for college basketball has declined in recent years.

Many marketers are expecting a substantial increase in the number of mobile-streaming viewers, although most will still be watching on broadcast. The potential for marketers across devices is very high.

Sling TV notes that the average time viewed on a PC, Mac or mobile device is 585% higher than normal.

Viewers will use mobile sites and apps to check for updates more than any other screen, according to a recent survey from Opera Mediaworks. Nearly 25% of those watching on TV will be checking apps and sites for updates on other games in the tournament. Also, 60% of those who do keep up to date on the games will do so through sports apps.

Among those watching the games on broadcast TV, 28% are likely to look up an ad again on their device.

Some 42% of those ages 18-24 will be keeping up using mobile devices -- which makes sense, as Millennials tend to be mobile-first device users.

Marketers will also look to leverage mobile location data to their advantage by targeting people who attend games, differently from those who watch the games from bars or from home.