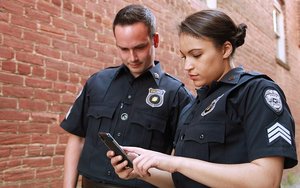 Here's another way data is used for targeting -- not to prospect for potential customers, but to perhaps make us safer (or feel more intruded upon?), as reported previously in our column The Social Graf:

Police departments around the country are using high-powered analytics software to comb social media and calculate threat levels for individual suspects before they are arrested, according to the Washington Post, which first reported the news.

The program, called “Beware,” uses addresses awaiting police response, finds the names of individuals who lives there, and checks their name against social media and other publicly available sources of information like property records and prior arrests to determine if they may pose a threat to responding officers. In one example cited by the software’s manufacturer, Intrado, an individual who is a military veteran with post-traumatic stress disorder and posted troubling comments on social media would raise a red flag.

Beware is part of a wide-ranging information gathering push that allows police to collect and analyze data from a number of sources in real time. One police department visited by WaPo in Fresno, California, combined social media information with a database of vehicle locations, audio from microphones listening for gunshots, and surveillance footage from over 200 video cameras around the city, with plans to add footage from police officers’ body cameras as well.

This level of social media surveillance is actually fairly tame compared to what other systems are capable of. Back in 2013 Raytheon, the global defense contractor with close ties to the U.S. government, developed software that can track an individual’s physical location using information from social media including data embedded in photographs. The program, called Rapid Information Overlay Technology, also draws on information in social media posts to determine location and activities, to create a precise daily itinerary for an individual.