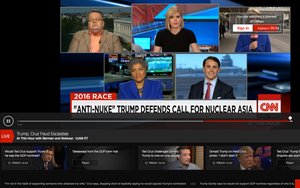 “The availability of more viewing options appealing to a wide array of tastes, in addition to the continued expansion of premium original scripted programming on cable networks, has likely contributed to this effect,” according to a comScore report.

All this comes in the wake of Nielsen recently reporting a fourth-quarter 2015 drop in cable subscribers of 2.5% and a 1.7% decline among all pay TV providers -- cable, satellite and telco.

Cable network-based subscription video on demand services such as those from HBO and Showtime, are the fastest growing segment, now at a 31.2% share up from a 30% in the first three quarters of 2014.

Transactional On Demand -- pay-per-view special events -- continued to decline, now with a 7.1% share through the first nine months of 2015 down from a 8.6% in the previous year for the same time period.