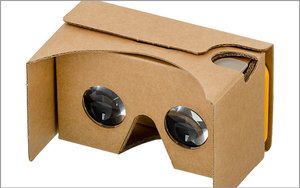 Google has announced a way for Apple developers to write virtual reality apps for the iPhone. The shift will enable iPhone users to use Google Cardboard to view VR.

Wednesday's news that Google will release a software developer's kit (SDK) for iPhones on the company's Developers Blog will have a major impact on the company's VR strategy. The no frills Cardboard headset sells for about $25, and it turns smartphones running Android into a VR screen. This move allows developers to customize apps for the Apple iPhone.

A race car app will allow users to experience different tracks. A travel app will enable the user to experience a deep-sea dive. Or a real estate app will let the user take a virtual tour of a house, a condominium, or an apartment. A construction home builder could design an app that lets the home buyer who's building a house in the country to see the view from every window in each room within the home.

With the Cardboard viewer, users can see 360 images or videos or images on their phone or desktop computer. "For native apps, you can embed a VR view by grabbing the latest Cardboard SDK for Android or iOS and adding a few lines of code," explains Nathan Martz, Google product manager. "On the Web, embedding a VR view is as simple as adding an iframe on your site. We’re open-sourcing the HTML and JavaScript for web developers on github, so you can self-host and modify it to match your needs."

Virtual reality continues the trend to get real. Facebook recently began shipping its Oculus Rift product, but reports suggest it's already missing shipping deadlines and it's riddled with first-iteration flaws. I had the opportunity to try out the VR headset just one day before Facebook announced the acquisition of Oculus. It was quite impressive back then.

One of the major flaws of Rift is the long cable that attaches from the head piece to the machine. Cost may be another roadblock for Facebook. The Oculus ready PC and a Rift Start at about $1,499 -- a far cry from the $25 investment Google wants consumers to make.