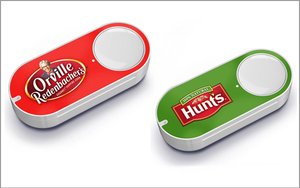 They are among a new wave of brands being introduced in the Dash program as it marks its first anniversary, Jonas Paretzkin, director, emerging technologies and e-commerce for ConAgra, tells Marketing Daily.

Consumers stick the adhesive-backed, WiFi-enabled Dash devices up in their homes to enable push-button replenishment ordering of their favorite brands through Amazon.

The range of available products during the initial testing months of the program has been limited: About 500 items from 29 brands were being offered as of last October. However, the offerings have continued to expand, and as of March 31, the number of brands with buttons has been tripled to more than 100, Amazon announced.

While Amazon has been tight-lipped about the sales results to date, it did report that Dash orders had grown by more than 75% in the past three months. The company had shipped an estimated 300,000 to 500,000 of the buttons as of last October, Piper Jaffray analyst Gene Munster reported to Bloomberg.

Reflecting a business model that includes the costs and logistics of shipping and depends on volume and frequency for maximum profitability, the offerings have been dominated by nonperishable staples that need regular replenishment.

As of March 30, there were about 13 buttons for household supplies, featuring brands including Tide, Bounty, Clorox, Hefty, Glad, Dixie and Cottonelle; as of March 31, 32 are listed.

Food offerings have been notably limited up to this point: Basically Kraft Macaroni & Cheese and Larabar, plus Orbit Gum and Ice Breakers mints.

For CPG companies facing competition from upstart brands and sales challenges for “center store” products, testing the Dash buttons is one effort within the increasingly important strategic goals of broadening their distribution channels beyond traditional brick-and-mortar stores and reaching new consumers who are potential brand converts.

ConAgra’s priority is “bringing value to consumers,” which includes identifying and “scaling out” platforms that “make it super-easy for consumers to get our products into their homes,” says Christy Kazlo, the company’s manager of media services. Dash has potential to be just such a platform, she says, adding that ConAgra and Amazon worked together to identify brands best-suited to Dash.

“Grocery and commerce in general are changing rapidly, so we’re trying to take advantage of any opportunity we can to learn,” Paretzkin says. “We’re always looking for ways to test and learn in the e-commerce environment, and we have a small fund set aside for specific marketing innovation in e-commerce and other areas of marketing.

“What we’re seeing is that purchasing habits are starting to be formed now in e-commerce,” he adds. “Consumers seem to be a little more open to trying new brands online [than in stores], and with digital merchandising opportunities, it’s even easier to actually put our brands in front of consumers. So we think there’s an incremental opportunity.”

Paretzkin notes that ConAgra has been partnering with Amazon on various initiatives for some time, and that most of its shelf-stable products are already sold on the e-commerce site, so the Dash test—which required only a “nominal” investment on the food giant’s part, he says—seemed a natural extension. (When Dash launched, the first brands were reportedly paying $100,000 to participate, although that may have changed since.)

To support its Dash entry, ConAgra will employ owned and paid social media channels, plus some search marketing, and will look at doing some promotion on Amazon itself “down the road,” Paretzkin says.

Paretzkin confirms that the company hopes to expand the Dash program if all goes well. But he stresses that the broader objectives span Amazon as a whole and many other e-commerce opportunities.

“I think we’re just scratching the surface on Amazon to date, but it’s growing rapidly,” he says. “So while it’s a small percentage of our overall sales, we’re very excited about the opportunity—which is why we’re trying things like the Dash buttons.”

Paretzkin reports that ConAgra is also offering its products through the rapidly expanding Instacart delivery service, starting relationships with newcomers like Jet and Boxed, and participating in tests with the many traditional supermarkets and other retailers that are ramping up at-home delivery and click-and-collect offerings (both on their own and through partnerships).
Currently, e-commerce channels as a whole generate about 1% to 2% of ConAgra’s overall sales, which is on par with the industry as a whole, he notes.

But overall grocery e-commerce is growing at a rate of 39% per year, according to Kantar, “and our objective is to outpace that growth,” Paretzkin says.

On the Amazon front, brands of all kinds are indeed likely to have many more opportunities within the near future. The Dash button is currently consumer-activated (albeit by a single push of the finger), making it ideally suited for staple products with consumption and replenishment patterns that may not be totally predictable.

But Amazon is well into partnering with makers of appliances and devices for the Dash Replenishment Service—which builds into appliances the ability to keep track of, and automatically order, staple products like laundry detergent. And there’s every reason to believe that the e-commerce giant is looking to expand such auto-ordering, Internet-of-Things capabilities wherever possible.