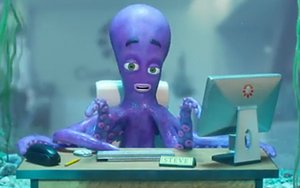 This week, CustomInk, maker of custom apparel and accessories, is launching not one but two advertising campaigns, “For All of Life’s Events” and “Steve the Spokestopus,”across TV and digital media platforms.

The campaigns are a new direction for the company -- a necessary evolution of its current ads, it says -- and were designed to have broad appeal among target consumers.

CustomInk aired its first TV commercial in 2012, which increased brand awareness and generated sales, and since then has managed its advertising program with traditional direct-response creative, aired on smaller cable networks.

Now, the Fairfax, Virginia-based company has developed creative specifically for digital media platforms to increase its advertising footprint. Created by ad agency Supermoon, the new campaigns were designed to revitalize and elevate the brand’s creative identity.

"Steve the Spokestopus" uses an animated super-fan of CustomInk, an octopus named Steve, to deliver playful messaging about the company's service, quality, and products. It will launch with a series of 30- and 15-second spots.

"For All of Life's Events" was inspired by CustomInk customers and taps into the connections people have with custom t-shirts throughout their lifetimes. Each ad depicts a sequence of scenarios, illustrated by custom t-shirts and other products that together tell a narrative of one person's life over the span of several years. "For All of Life's Events" includes a series of 30- and 15-second spots that focus on three storylines.

"At CustomInk, we believe in the power of custom T-shirts to bring people together and that every t-shirt has a story behind it,” says Wendy Connell, vice president of marketing, in a prepared statement. “We are thrilled to see these campaigns come to life as they highlight the integral role of our products in promoting identity, strengthening communities, and celebrating the groups that wear them."