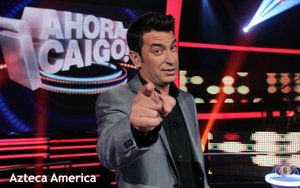 The growing Spanish-language network known as Azteca America announced three new prime-time shows, the return of several existing series, promoted its Mexican soccer game telecasts on Friday and Saturday nights, unveiled several digital initiatives, and emphasized the growth of its audience and the sustainability of its programming at the upfront.

The network’s top executives did all of this in just under 25 minutes at a presentation staged for ad agency reps and members of the press Tuesday evening in New York. The event kicked off the upfront season for Azteca America, whose presentation tagline this year is “Game on!”

“We are entering the upfront season focusing on four things -- our growth, sustainability, evolution and you,” said Azteca America President and CEO Manuel Abud, addressing the attendees. “I really want to take this opportunity to thank you for your business and to thank you for the partnership. It really means a lot to us to be able to connect your brands with our audience,” he said.

Abud and Craig Geller, Azteca America’s executive vice president of network sales and digital, who spoke after Abud, both made sure to drive home the point that the network’s audience is growing “across all demos and all dayparts.”

“Yes, growth in a marketplace that is experiencing dramatic declines,” Geller said. “The audience has voted, they’ve made their choice and they’re coming to Azteca America.”

Geller’s portion of the presentation stressed how Azteca America is grappling with the multiscreen experience that is so much a part of TV viewing today.

“The way that we connect with today’s consumer has never been more in flux and all the technology has enabled the viewer to be in complete control,” he said. “Content drives engagement.”

He then announced the creation of a data tool called Azteca RPM, which stands for Real-time Participation Media. The tool will provide prospective advertisers with detailed measurement of the ways in which second screens “surround your brand from TV to mobile second-screen multitasking,” Geller said.

The other announcement was the creation of a new digital studio called Azteca Glassworks for producing branded content. “Azteca is open for business,” Geller said.

In the programming realm, Azteca announced three new shows: “Ahora Caigo” (translation: “Now I Fall”), a competition, crossword-style game show in which a wrong answer will have contestants suddenly falling out of sight through a trap door on the stage floor. “Ahora Caigo” will be part of Azteca America’s family game show block known as “La Hora Ganadora” (“The Winning Hour”) seen nightly at 7 p.m. Eastern.

“Desafio” (translation: “Challenge”), a far-flung reality-adventure series bearing similarities to “Survivor” and “The Amazing Race,” in which participants will be tested by various challenges – from forces of nature to other obstacles. The first season is set to take place in Morocco (“Marruecos”). “Desafio” will join Azteca America’s lineup at 8 p.m. Eastern.

“Rabia” (translation: “Rabies”), a drama series produced in Spain about an outbreak of rabies that is sweeping the country and causing widespread hysteria and chaos. “Rabia” will be part of the network’s drama block at 10 Eastern.

The 9-10 p.m. hour stays the same with the Azteca America news magazine show “Al Extremo” (“To the Extreme”).