Coca-Cola's Hi-C Ecto To Return Along With 'Ghostbusters' 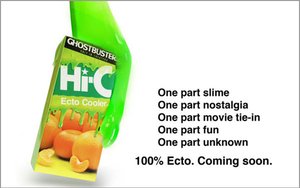 The release of the “Ghostbusters” remake starring Melissa McCarthy and Kristen Wiig is still nearly three months away (July 15), but the merchandising tie-ins are already upon us.

First out of the gate is a revival of The Coca-Cola Company’s Hi-C Ecto Cooler.

The slimy green drink originally launched in 1987 as a tie-in to “The Real Ghostbusters,” an animated TV series spin-off of the 1984 movie. Even after the TV show went off the air in 1991, the drink remained popular enough that Coca-Cola continued to market it until 2001.

Hi-C Ecto Cooler online fan groups have long lobbied for its return, and they stepped up their efforts when the “Ghostbusters” remake was announced.

Sony Pictures “was extremely enthusiastic” about bringing the Millennial cult-favorite beverage back as a tie-in to the movie reboot, said Charles Torrey, VP, Minute Maid/Hi-C Brands, Coca-Cola North America, in the release.

Hi-C Ecto Cooler will be back in stores for a limited time starting May 30. It will be sold in 6-ounce juice boxes and in 11.5-ounce cans printed with thermal ink that turns a slimy green color when the product inside is cold.

Promotion is already underway, starting with a sweepstakes running from April 25 through May 9.

Fans can earn chances to win one of 50 10-packs from the juice’s first production run by tweeting @Ectocooler Sweepstakes, or visiting the brand’s Facebook page and responding to the host’s post with a post that includes #EctoCooler and #Sweepstakes.