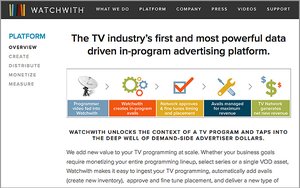 Bloomberg Media, the media arm of the business and financial news company of the same name, announced a partnership with Watchwith, a platform for native digital advertising to launch Bloomberg VidPlus.

According to a presentation at Digital Content NewFronts on Monday, Bloomberg has seen an increase in both video views (up to 20 million while doubling the company’s streams) and mobile users (up 25%).

“Instead of just moving TV to the Internet [Bloomberg is] developing unique products that are only possible on digital platforms,” stated Zane Vella, CEO at Watchwith. Vella’s company’s partnership with Bloomberg will allow Bloomberg to serve ads that will pop up momentarily during videos.

“Partnering with Watchwith to create Bloomberg VidPlus allows us to deliver an interactive and data-driven viewing experience that provides value beyond the screen while driving deeper engagement,” stated M. Scott Havens, global head of digital at Bloomberg Media.

Watchwith announced a partnership with SaaS analytics company Moat back in December, which enabled it to measure various metrics on its own campaigns. Since then, the company has partnered with several major TV networks, including Fox, Scripps, and Turner—as well as some large publishers, including CNET and now Bloomberg.