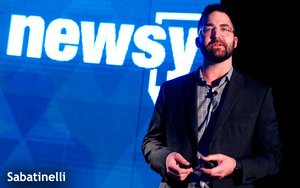 Newsy, the video news service that debuted eight years ago from the journalism school at the University of Missouri, introduced itself to the New York advertising community with its first NewFront presentation Monday night.

The company announced three new long-form programs, and promoted its short-form news videos for their storytelling qualities, their appeal to Millennials and their availability on a multiplicity of platforms.

“[We are] connecting and engaging our users, no matter the device,” Sabatinelli said. “Simply put, if you want to reach someone today, right now, we can do it.”

Newsy is now owned by E.W. Scripps Co. While Newsy’s bread and butter is the 25 to 30 original short-form news videos it produces daily, the company is branching out into long-form with three new projects announced at the presentation by Christina Hartman, vice president of news.

One of them is “Americanize Me,” a food show that will focus on how various ethnic cuisines were altered (and in some cases invented) for an American palate by immigrant groups. Another is “The Blind Spot,” whose title refers to a period of relatively recent history — roughly 1980-2000 — that Millennials know very little about.

“The Blind Spot” will document the top stories and events from the Reagan and Clinton eras.

The third show, Asking for a Friend,” will feature an exuberant host asking awkward or uncomfortable questions on subjects ranging from etiquette to personal hygiene and providing the answers.

Part of the Newsy presentation was devoted to outlining branded-content opportunities for advertisers that run “alongside our editorial content,” Sabatinelli said. Newsy’s two “vehicles” for branded content are its original series and a unit of the company called Newsy Brand Studios, “the people who create custom native content,” he said.

Separately, Azteca America, the U.S. offshoot of Mexico’s TV Azteca, has signed its first sponsor for its Real-Time Participatory Media (RPM) service announced at its upfront presentation last month. The client is Western Union, which has begun a two-week, RPM-based promotion of its global payments services connected to the Mother’s Day holiday this past Sunday.