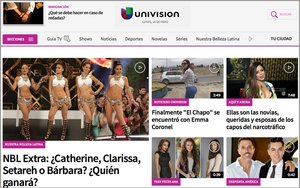 Joining other big TV network groups in offering up more ad-tech alternatives for marketers, Univision has signed a deal with AOL that will expand the Hispanic TV group’s efforts in selling linear programmatic TV advertising.

Now as part of its One by AOL initiative, is a self-serve platform allowing advertisers programmatic access to linear TV inventory. In using One by AOL, advertisers can now execute media plans against linear TV, mobile and digital investments.

AOL’s deal with Univision will start in the fourth quarter of 2016.

Univision said advertisers will have full control over their own first-party data and can leverage AOL’s first-party predictive targeting tools as well as advanced third-party TV targeting segments.

The company did not disclose specifics with regard to TV programs or inventory which would be available through its deal with AOL.

Keith Turner, president of advertising sales and marketing for Univision Communications, said the big Hispanic TV network group/media company has been selling its programming programmatically for some time.

The company also said it would offer up more details about the deal at its upfront presentation this week.

Last month, AOL expanded its One by AOL effort to include a self-serve programmatic TV platform. Omnicom Media Group is the exclusive agency launch partner of One by AOL: TV; soon to begin testing the platform with clients.