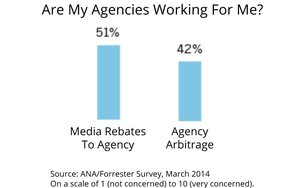 Following months of speculation -- and a week of speculative press reports -- the Association of National Advertisers will release findings of its so-called “transparency” study examining the U.S. media-buying marketplace.

The findings -- which are the result of research conducted by K2 Intelligence, which interviewed a cross-section of key stakeholders on the supply and demand sides of the media-buying business -- are expected to include some bombshells that lay much of the blame at the feet of agencies, especially big agency holding companies that have institutionalized various forms of rebates, kickbacks and indirect payment models from media suppliers, according to several reports citing unnamed sources alleged to be knowledgeable about the report’s findings.

The investigation is part of a series of efforts being undertaken by the ANA, which were jump-started when former Madison Avenue media-buying bigwig Jon Mandel spilled the beans during a presentation at the ANA’s 2015 Media Leadership Conference.