Yelp Uses Humor To Show How It Can Help 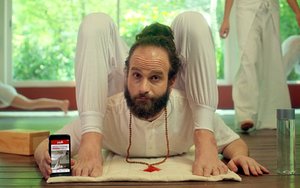 Yelp helps save desperate people from horrible situations, including a dentist at his first day of work, a class led by a less-than-limber yogi and a trashy tropical hotel hosting an inexplicable mattress fire.

A new ad campaign tells consumers there’s always a better option on Yelp, which has “whatever you need, whenever you need it.” The effort, from Reid Sheehan Latimer+Crew, San Francisco, highlights the local business review service’s expansion across multiple verticals and its increasing mobile focus.

“We needed an actor who effortlessly projected the Yelp brand attributes of ‘funny, useful, and cool,’” Osborn tells Marketing Daily. “Ben does this perfectly; it's easy to imagine him as the person his friends go to when they need a recommendation on...anything. Which is what Yelp is all about.

The 15- and 30-second executions are intended to make people actively seek out the service when looking for a better business.

“The campaign is designed to build awareness of Yelp and show its relevance in consumers' everyday lives, which helps drive usage in categories beyond restaurant reviews,” Osborn says. “RSL+C realized that the success of the advertising would be hinged on our ability to make an emotional connection when showcasing these broader services from Yelp. We felt there was a difference between just being informed and adopting the brand into your life.”

The campaign is targeted at urban, mobile-centric consumers who seek credible information about small businesses, enjoy sharing their opinions, and are looking for a variety of choices.

Video executions on digital and social channels will drive awareness with viewers on mobile and capture eyeballs missed by TV. In addition, the work aims to expand awareness of Yelp’s services beyond restaurant reviews to a tool that can help consumers in a variety of categories.

The work is an extension of Yelp’s humorous “We Know Just The Place” campaign, also created by RSL+Crew and starring Sinclair, which launched nationwide on air and online last September.

“This round marks an expansion for the campaign into social and digital efforts,” Osborn says. “Preroll and paid placements on social channels all play a larger roll, with the creative specifically tailored by our agency for these growing media platforms (in addition to television). We also lit way more mattresses on fire this time around.”