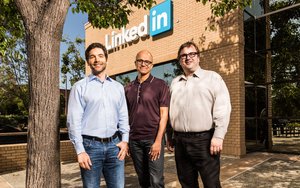 Microsoft has reached a deal to acquire LinkedIn for $26.2 billion. The all-cash transaction agreement, announced Monday, values LinkedIn shares at about $196 each.

It puts Microsoft in a much better position to grow its enterprise suite of software and extend Bing Ads into the social network.

"The LinkedIn team has grown a fantastic business centered on connecting the world’s professionals,” said Microsoft CEO Satya Nadella in a prepared statement to employees.

“Together we can accelerate the growth of LinkedIn, as well as Microsoft Office 365 and Dynamics as we seek to empower every person and organization on the planet.”

Microsoft says LinkedIn will retain its own brand and independence, and existing CEO Jeff Weiner will remain and will report directly to Nadella.

Microsoft invested in Facebook early on before the company went public and continued to support its infrastructure. Still, Facebook struggled to enter the enterprise space. LinkedIn puts Microsoft in a position to expand on its enterprise services and suite of business software.

Nadella said as the LinkedIn and Office 365 engagement grows, "new opportunities will be created for monetization through individual and organization subscriptions and targeted advertising."

LinkedIn has more than 430 million members.

Microsoft will finance the purchase, in part, through new debt, but company officials said it still intends to finish buying back $40 billion in stock by the end of this year.