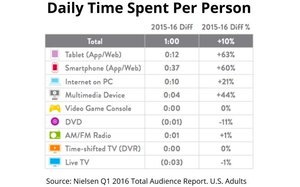 Although analysts say U.S. media use is nearing media saturation, total media consumption for the first quarter of 2016 among U.S. adults rose around 10% versus the same period the year before.

Nielsen says adults added one hour of media on average per day to total 10 hours and 39 minutes. This contrasts with a nearly identical media use in the first quarter of 2015 versus 2014 -- 9:39 versus 9:32.

The big gainer for the most recent period was smartphones, rising 37 minutes, up 60% versus the same period a year before. It now totals one hour and 39 minutes a day (1:39) -- the third most-used media.

Other new media continues to grow: Computer Internet use was up 10 minutes, a 21% gain to 58 minutes a day; tablet usage grew 12 minutes, up 63% to 31 minutes a day. Multimedia devices added on four minutes, 44% higher, totaling 13 minutes daily.

Playing DVDs took the biggest hit, down 11% (one minute) to 8 minutes a day