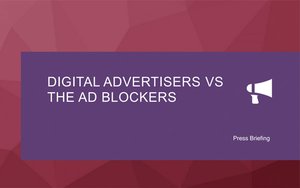 Digital advertising revenues are expected to double by 2020, rising to $285 billion, according to a new study from Juniper Research.

The “Worldwide Digital Advertising: 2016-2020” study estimates that ad blocking is expected to cost publishers $27 billion in lost revenues in the next five years.

According to the white paper “Digital Advertisers vs. The Ad Blockers,” global digital advertising spend across mobile, wearable and online devices will exceed $285 billion by 2020.

That's up from an estimated $160 billion in 2016, despite the growing use of ad blockers -- thanks in large part to an average annual growth of 22% in mobile and wearable advertising spend.

Other key findings reveal that mobile advertising is expected to undergo a 64.2% CAGR (Compound Annual Growth Rate) over the forecast period, as users continue to switch to mobile devices as their main browsing device.

On the other hand, online ad blocking is expected to contribute 70.2% of all lost revenues in 2020, with the rest coming from mobile platforms.

“Adoption [of ad blockers] is being driven by consumer concerns over mobile data usage and privacy,” research author Sam Barker stated. “They are also incentivized to adopt the technology in order to reduce page load times.”

The study found that most ad blocker adoptees are between the ages of 18 and 29. Female millennials were more likely to use ad blockers.

Despite the lost revenue from ad blockers and the rising adoption of ad blockers, “better audience targeting will drive higher click through rates and increase publisher revenues,” the researchers predict.

“Publishers, such as Facebook, are utilizing their unprecedented audience knowledge to offer advertisers highly accurate targeting, thereby increasing the click through rates that advertisers are witnessing now,” Barker stated.

The research found that smaller publishers are most at risk from ad blocking software “as they often solely rely on revenues from advertising to continue operating.”