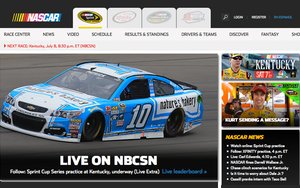 Halfway through 2016, NASCAR fans are tuning in to more telecasts and engaging even more on digital and social.

Through Sonoma (16 races), NASCAR.com is averaging 9 million unique visitors per month. Across all NASCAR digital platforms, NASCAR digital media has registered 484 million page views and 145 million on- and off-platform video views. NASCAR mobile apps have been downloaded 670,000 times in 2016, per NASCAR.

“We’re delighted here at the midpoint of our season that fans are tuning in and engaging across digital and social platforms like never before,” Brent Dewar, NASCAR chief operating officer, tells Marketing Daily.

NASCAR social platforms have gained 1.1 million followers since the start of the year in 2016, an increase of 11% and more than double the growth seen in the same period last year. The NASCAR Facebook and Twitter accounts have generated over 2.1 billion impressions YTD, according to NASCAR.

NASCAR is also doing fairly well on TV. As the season has progressed, year-over-year ratings have stabilized, with the average NASCAR Sprint Cup Series rating not far behind 2015 (down -3 %). Coke Zero 400, the first race of the 2016 NBC season at Daytona, started strong and ranked as the most-viewed NASCAR Sprint Cup Series July race at Daytona since 2011 (YOY numbers showed a +26% ratings increase and a +43% viewership increase for that race).

While Daytona and Atlanta experienced significant declines (-18%) average ratings of the remaining Fox events (3-16) built momentum to close the gap to -6%.