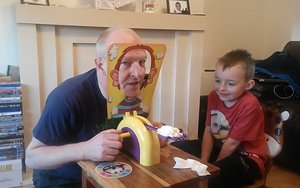 Consumers are changing product design, perception and speed to market, not just advertising and marketing. It happens frequently at Hasbro. The company just kicked off the Star Wars Fan Figure Vote, where consumers get a chance to decide the characters that will join Hasbro's 6-inch Black Series collection -- but the real consumer success story started with a video.

Pie Face, which Hasbro launched last year, became a hit when a grandfather and his grandson turned their playtime into a viral video after one got hit with whipped cream and the two laugh hysterically. This fall Hasbro will incorporate a challenge into the Pie Face game.

"It became a phenomenon," Victor Lee, SVP of digital marketing at Hasbro, told Search Marketing Daily at VidCon in June. "The grandfather and grandson created the brand with the viral video," he said. "You couldn't duplicate the laughter and competitiveness."

Lee said when Hasbro runs a TV ad we know that within seven days consumers who saw it start searching for the product on Google, Bing or whatever search engine they use. Site traffic spikes. Conversations happen in social. Hasbro also uses data to understand behavior, not an individual. "We understand search traffic provides data," he said. "You can over-analyze the data, but it's authenticity that tells the story."

Hasbro used the video with the grandfather and the grandson playing Pie Face in its campaign. In the old days it was about brands putting their product out there and telling consumers what they should feel or do with it, according to Victor Lee, SVP of digital marketing at Hasbro. Now consumers are becoming the creation and the marketing platform, Lee said. "It's become word-of-mouth either through a fan base of one or one million," he said.

It's a tricky slope, Lee said, because there are brands that will go after the influencers with 100 million followers, but Hasbro tries to find the authenticity in the relationship. "If you dig deep into YouTube talent, one of their strongest values is the transparency and authenticity," he said. "Once an influencer loses that with their fan base they lose a lot of credibility."

For Hasbro it's about finding the right ones that can represent our brands even if they're off camera. And that gives Hasbro cadence in terms of the story they want to tell. They want to work with influencers like the grandfather and grandson because they love the product, not just because it's a business transaction, Lee said.