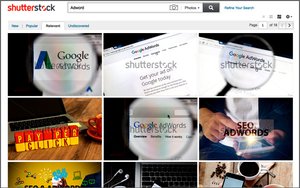 It's a new era in advertising when the technology platform automatically chooses the art to go with the words. Shutterstock announced Tuesday a licensing deal with Google that gives marketers access to a library of 90 million images to use with their advertisements running through Google's AdSense, AdWords and AdMob platforms.

Advertisers do not need to select the images. Google's technology programmatically, or automatically, matches images to ad copy based on keywords that are in the ads. The platform also tests the performance of the images with the copy to increase the relevancy for the intended audience.

The ability to select the images after advertisers create the advertisement using specific keywords within the ad should increase performance and drive consumers from clicks or views to purchasing the product or the service. Shutterstock’s technology tests the performance of the images with the copy inside its advertising products.

The perfect image in an advertisement has shown to drive conversions. The best example is when Google introduced Product Listing Ads in search results, according to Sucharita Mulpuru, a retail analyst at Forrester Research. The ads generate clicks to Web sites. "They are a huge part of Google's revenue growth and retailers find tremendous value in them," she said. "That's why many are growing their investments in product listing ads more than core search."

Mulpuru said the main difference is the imagery. She said we know retailers are frugal and they wouldn't invest in the ads if they weren't seeing a higher return on investment.

Merkle indicated that Google spending quarter to date is tracking up about 23% year on year vs. 25% YoY in 1Q. Merkle also anticipates clicks to grow 35% y/y and CPC to decelerate 8% y/y. Ballard noted that the decrease in CPC can be attributed to a difficult comp as advertisers saw an increase in CPC in 2Q15 for certain brand keywords. Strong click growth for the quarter was the result of the continued strength of mobile and product listing ads (PLAs).

The advertising agency Merkle in the first quarter of 2016, noted that product listing ads (PLAs) represented a little more than 40% of total Google paid clicks among retail clients and believes it could surpass 50% by the end of the year, according to a research note from equity firm Raymond James. The note published in June 2016.

When it comes to supplying images, Shutterstock competes with companies like Adobe Systems, which offers about 50 million photos and videos, according to analysts. The company acquired Fotolia to launch its products in June 2015, according to Investors' Business Daily.

The integration between Shutterstock and Google is live. The agreement isn't exclusive, but today Shutterstock is the only company Google taps images from for its ad products, according to Shutterstock. Google joins AOL, Salesforce and Sprinklr in integrating Shutterstock search capabilities directly into their products.