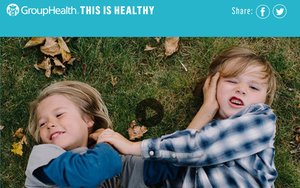 The healthcare industry typically shows happy, shiny people exercising in their advertising. Group Health Cooperative, on the other hand, wanted to redefine being healthy as something more meaningful.

Developed with marketing agency partner DNA, the "This is Healthy" campaign is designed to reach target audiences by engaging them in defining what healthy living means to them through pictures, stories, actions, words and more.

As one member noted: “We define ourselves by our spirit. Not time spent in the gym.”

A key focus for this campaign is to engage with people via the digital world, says the agency. The campaign uses Facebook, Instagram, Twitter and targeted online display ads to reach people and ask them to join Group Health.

Its members are encouraged to share their notion of “healthy” with the hashtag #ThisIsHealthy.

Also, a microsite further invites people to share their experiences about how they live healthy lives. The site then aggregates member’s social posts to showcase the diverse definitions of living healthy lives.

"We wanted to redefine being healthy as something more meaningful. Being healthy is not about attaining perfection. It’s about being comfortable in your own skin and enjoying your life,” says Kammie McArthur, creative director, DNA.

The campaign runs across its member network in the Northwest with digital, social and out-of-home elements.

Group Health has regularly pushed to redefine healthcare advertising. Previously, its "One Goal" campaign promoted how people live their lives rather than focus on any one disease or quality of care. Group Health says it developed the first online app in the U.S. that allows members to directly access their providers and health care records on their smart phones.

The Washington-based Group Health's advertising expenses were $5.43 million and $4.29 million in 2015 and 2014, respectively, according to its most recent financial report.