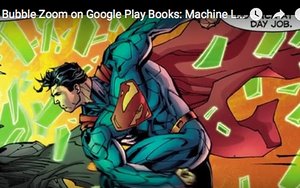 Appealing to comic book fans everywhere, Google just launched Bubble Zoom -- a new feature that should make it easier for mobile users to follow their favorite villains and heroes.

Using the same technology to recognize objects in photos, Google trained its system to identify speech bubbles in comics. Bubble zoom expands the speech bubbles of a comic one tap at a time, making them easier easy to read on small devices.

“It’s much easier to read digital comics one-handed as Bubble Zoom automatically identifies and expands each speech bubble for readability,” Greg Hartrell, head of product at Google Play Books, notes in a new blog post. “No more compromising the full-page experience or getting lost while panning around.”

This not the first time Google has sought to improve mobile experiences for fiction fans.

Last year, Google Play made it easier to find and read your favorite comics on your phone or tablet, including a vertical scrolling feature. Naturally, Google made the announced at Comic-Con in San Diego, this week. All Marvel and DC collected volumes will be supported, according to Hartrell.

Bubble Zoom is one of many changes that publishers and platforms are making to meet the needs of mobile users -- and for obvious reasons.

Indeed, smartphones displaced the PC as the dominant device for downloads and content consumption, earlier this year.

Specifically, Limelight Networks found that 62% of users download content onto Android-based smartphones, while 43% of Apple’s iPad and 45% Android tablets led the way as the prevalent destination for content downloads.