Hey Siri, What Can You Search?

Would advertisers find it helpful to optimize campaigns if they knew all the types of voice search queries and calculations individuals could do using Apple Siri and Google Voice? Perhaps two technology geeks think they would.

The site identifies voice commands for categories like mathematical conversions, data calculations, apps and app store searches, control and settings, and more. In fact  hey-Siri.io offers a total of 489 commands, about 1,204 variations, and 35 categories in two languages, English and German, with other languages coming soon.

"Siri can do a lot of things and makes so many things faster," Roth told Search Marketing Daily in an email. "Setting a timer/alarm, calculating, finding photos and more is so much faster when you can use your voice instead of typing. Siri can even create a reminder for an E-mail ("Remind me about this"), there is no other way to do this."

He says that unfortunately Apple doesn't provide a large list with commands. There are some commands listed on Apple.com but the list is very incomplete, the layout takes too much space and there is no search. Even the categories on the site are not really useful. That's why he created Hey-Siri.io.

Siri can also change the brightness of lights in a home when using a HomeKit, as well as monitor and change the temperature in a house, lock or open the front door, and open and close the garage.

Roth says the goal is to make the largest and best list with as many commands as possible in different languages and for all Apple Devices.

Roth isn't alone in his antics. Kristijan Ristovski created a site that allows individuals to find "Okay Google" commands. On the Web site he writes: Annoyed by the fact that every once in a while a new complete list of Google Now commands' appears online, he decided to create this project.

Through the project Ristovski found a list of more than 150 commands and more than 1,000 variations. The list ranges includes people and relationships, time, weather, stocks, conversions, math, device control, definitions, alarms, and more like social apps and messaging. 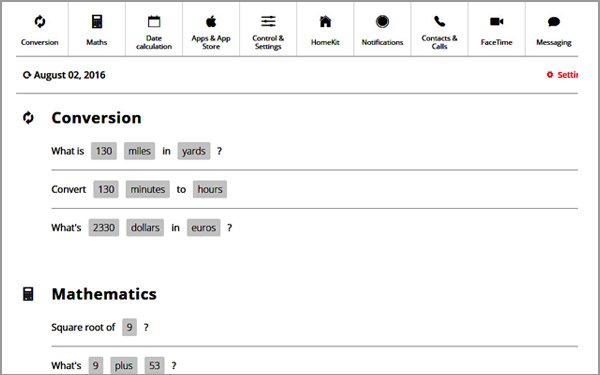