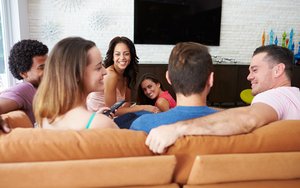 National TV ad spending rose 3.3% in the second quarter -- but much of those gains went to lower CPM cable TV shows.

Broadcast national TV was flat from the second quarter a year ago -- with the top four broadcast networks slipping 2.5%.

SMI says cable prime-time programming witnessed a 10% growth in 30-second commercial unit pricing to an average $8,370 a spot -- with the biggest growth on Sundays, which rose 33%. Major original episodes of cable network shows debuted on that day.

The company says cable was able to gain because of general lower cost-per-thousand viewer (CPM) programming.

Broadcast late-fringe big unit price declines also witnessed a jump in audience deficiency units -- makegood inventory for guaranteed deals to marketers. Late fringe ADUs jump to 22% of all network inventory from 15% in the second quarter 2015. Prime-time ADUs were at 16% of all that daypart inventory, and morning was at 16% as well.

On the flip side, cable’s makegood inventory dropped as a total percentage of inventory: Daytime went to 11% from 18%; prime time to 12% from 19%.

SMI says cable networks were helped by higher ratings from big sporting events -- as well as higher viewing on cable news channels due to the strong interest in this year’s political election season.