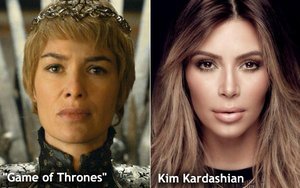 TV ratings will tell you how many people are watching a show, and even their approximate age (within various ranges).

But how do viewers really feel about the shows they’re watching? Learning the answer to this question is the aim of a fascinating area of study being undertaken by Frank N. Magid Associates, the media research and consulting firm.

Among the findings unveiled at a presentation in New York on Wednesday: “Game of Thrones” had the highest “evaluation score” (hence, the greatest “value” for those who watched it) of the 956 shows that were studied in the latest round of research the firm conducted.

By contrast, “Keeping Up with the Kardashians” had the third-lowest evaluation score among all of those shows. (The two that were lower were “I Am Cait,” at second-to-last, the Caitlin Jenner reality show that E! just cancelled; followed by infomercials.)

Conducted primarily by two researchers in a Magid office in L.A., the goal of the research is to uncover and assess “emotional signatures” that the research’s subjects -- viewers of myriad TV shows -- attach to the shows they watch.

The two researchers -- Max Dawson, senior director of video consulting for Magid, and Aaron Hoffman, senior director of product innovation -- presented some of their latest findings Wednesday in New York before an audience of about 40 senior program and audience researchers, marketers and ad sales professionals from major broadcast and cable TV networks. Horizon Media was also represented at the event.

The presentation was made in a small auditorium at the facility at Columbus Circle known as Time Warner MediaLabs. The breakfast event was hosted by Magid Senior Vice Presidents Mike Bloxham and Debby Ruth.

The presentation was titled “The Secret Emotions of Primetime TV: Key Industry Trends from Magid’s EmotionalDNA 3.1.” “EmotionalDNA” is the umbrella term that the researchers have coined for this ongoing project. This latest round of research has been designated “3.1” because it’s the third go-round (or “wave,” as they call it) for the research. This round was conducted in May and encompassed shows on broadcast networks, basic cable, pay cable (such as HBO) and SVOD services.

“Drama dominates the highest evaluations,” Dawson said, as a list was projected on a screen headed by “Game of Thrones” and also including dramas such as “Walking Dead,” “House of Cards,” “NCIS” and “Better Call Saul” that are still airing first-run episodes, and some shows whose runs have ended but are highly regarded (and still watched) such as “Breaking Bad” and “Sons of Anarchy.”

These “evaluation scores” are based on emotional indices such as “edge,” “originality” and “relatability.” The researchers assert that taken together, these emotional touchpoints give them a way to assess viewers’ engagement with the shows they watch -- and perhaps just as significantly, “intentionally” seek out (creating another index for the “EmotionalDNA” study: “Intentionality”).

Survey participants are asked to evaluate shows on a 1-5 scale, poor to excellent. “We have observed a very strong relationship between these evaluation scores and Nielsen ratings,” Dawson said. “Higher-valued content tends to be watched more. In addition to being watched more, it tends to be watched with more attentiveness or intention [and] more engagement. …

“These evaluation scores also have a strong relationship to advertising effectiveness,” he said (presumably making an exception of the dramas on pay cable or SVOD that don’t carry advertising). “Programs that have higher evaluation scores, we’ve observed, make better environments for advertising. When people value the content, they’re more likely to be engaged with it emotionally, connected to it and receptive to the ads within it. Our conclusion is that an engaged, emotionally connected audience is more valuable than a casual, disconnected, disengaged viewer,” he said.

Dawson and Hoffman explained that TV networks are using the “EmotionalDNA” research to help them better understand their audiences and how their shows are scoring with them. One early success story for the researchers was their discovery that the hidden-camera prank show known as “Impractical Jokers” was scoring very high evaluations with the audience for TruTV.

The data was so persuasive that TruTV management used it as the basis for transforming the network’s brand with new content compatible with “Impractical Jokers” -- including such shows as “The Carbonaro Effect,” “Adam Ruins Everything” and “Billy on the Street.” TruTV was an early client for this new research product from Magid. Other TV network companies are signing on too.

At the presentation, the researchers said they have found that the “bubble has burst” on a form of unscripted TV they call “shameless indulgence” or “guilty pleasure” programming. These include the “Kardashian” shows and the “Real Housewives” shows. The researchers say the rise in scripted TV shows recently -- particularly in drama, but also in comedy -- is a response to the decline of this category of unscripted shows.

And it’s true: Networks formerly dependent almost entirely on unscripted programming such as Bravo, Spike and Discovery (to name a few) are now developing scripted shows. “We’ve seen unscripted content be de-prioritized with an acknowledgement that there was just too much that was too derivative to make a meaningful impact in the marketplace,” Dawson said of the glut of unscripted shows.

As for the “shameless indulgence” category of unscripted programs, Dawson acknowledged that a select few of them are “some of the most watched programs [on TV] but at the same time [they are] some of the lowest-valued programs,” he said.

However, one category of unscripted programming maintains strong evaluation scores, the researchers said -- so-called “risk-and-reward” shows such as “The Amazing Race” on CBS and “The Challenge” on MTV. Dawson himself happens to be a former contestant on “Survivor.”

The presentation covered a whole lot more too, including misperceptions about SVOD and the gap between the amount of ink and attention that shows such as “House of Cards” and “Transparent” (to cite two examples) get from enthusiastic TV critics, and their actual viewership (and, by extension, the engagement of those viewers).

Based on their research, Dawson and Hoffman have also come to conclusions about why some shows succeed and others fail. All told, this “EmotionalDNA” research drills deep into the attitudes, motivations and reactions of TV viewers more than ratings can.