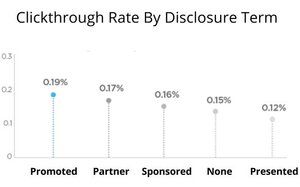 About a third of native ad placements fail to comply with federal disclosure guidelines, according to an analysis released this morning by a leading native advertising developer.

More significantly, the study suggests publishers may not be complying because the explicit nature of federal recommendations may not perform as well as more ambiguous approaches favored by some publishers and advertisers.

The report, Polar’s “State of Native Disclosure,” analyzed 137 native placements across 65 publishers and found only 55% of them utilized the term “sponsored” and 4.5% used the term “advertisement,” adhering to Federal Trade Commission guidelines that native ad placements are explicitly labeled as sponsored advertising content.

The remainder either had no disclosure at all or utilized more ambiguous terms such as “promoted,” “presented,” or “partner.”

In guidelines it published in December 2015, the FTC said such ambiguous terminology could potentially “mislead consumers that advertising content is endorsed by a publisher site and/or that the advertiser did not create or influence the content.

While Polar advocated adhering to FTC guidelines, and even provided links to the FTC’s recommendations and enforcement policies, the study found that one factor may be that more obscure terms actually perform better than explicit disclosures.

Interestingly, the study also found marked differences between the performance of native ad disclosures on desktop and mobile screens.

While “sponsored” actually outperformed “promoted” by a margin of 26% on desktop pages, mobile “was a completely different story,” according to Polar, with “promoted” disclosures outperforming “sponsored” by 105%.

The report provides much more granular analysis illustrating specific examples of labeling, highlighting and shading native ad formats on both desktop and mobile, and the relative degree of click-through performance. It does not examine higher order effects such as conversions or consumer perceptions and attitudes toward advertisers and publishers utilizing the formats.
advertising, ftc, native advertising, online publishing, study
3 comments about "Study Finds Third Of Native Ads Fail To Comply, Perform Better Than Fed Guidelines".
Check to receive email when comments are posted.
Read more comments >
Next story loading