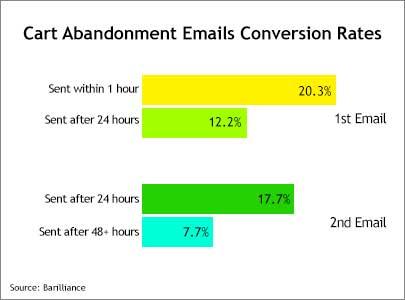 Almost a fifth of all cart abandonment emails lead to a conversion, according to a recent study by Barilliance.

The personalized Web marketing platform for retailers analyzed 200 ecommerce sites in August to determine the frequency and best practices of cart abandonment campaigns -- emails triggered by a consumer leaving a digital shopping cart before completing a purchase.

The average conversion rate of cart abandonment emails is 18%, according to the Barilliance study, but the success rate is largely determined by how quickly an email marketer can send the email.

The conversion rates of emails sent to a consumer within an hour of the time they first abandoned an online shopping cart peaks at 20.3%, according to Brilliance, but a delay of one day nearly cuts that conversion rate in half. Only 12.2% of emails convert to a sale if they are sent more than 24 hours after the initial cart abandonment.

Follow-up cart reminders also face the same differentiation with time, with the second email in a cart abandonment series more likely to convert if sent within 24 hours of abandonment versus after 48 hours. Almost 18% of the second triggered emails convert if they were sent within a day, but less than 8% of emails converted if they were sent after two days.

According to an aggregate of third-party studies by the Baymard Institute, updated in September, the average abandonment rate is 68.81%. Out of every 100 consumers that place an item in a shopping cart, only 31 individuals will complete the purchase.

That’s a lot of potential lost revenue, and it highlights the importance of marketing automation and trigger-based campaigns in any modern email marketing campaign. It comes as no surprise that cart abandonment emails have the highest revenue per email sent when compared to  their triggered email brethren, according to a recent Bluecore study, which places average revenue per cart abandonment email at $6.77.