New Yorkers To Get Made By Google Popup Store 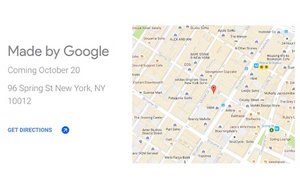 Information about a Made By Google store surfaced on the Web, providing directions to a location in New York. Within the URL, the word "popup" appears to indicate a temporary location just in time for the holidays.

The location, on Spring Street off of Mercer, will open on Oct. 20, 2016, according to the image first reported by TheNextWeb.

Google recently held an event to introduce a range of hardware from a smartphone to a Home WiFi device and virtual reality headset, all powered by artificial intelligence software to support the connected devices.

"All the hardware is definitely in response to defending their turf," said Ryan Sullivan, SVP, performance services at Performics, during an interview with Search Marketing Daily earlier in the week.

If the hardware does not provide the limitation, the software will ultimately drive consumer response, especially with AI, Sullivan said.

"When someone requests a search for movie times, the platform would not only search for the movie times, but purchase the tickets based on your schedule, location, and who you're going with," Sullivan said. "The power of this platform will change the landscape for search."

Traditional retail brick-and-mortar stores are not easy to operate, especially for a pure-play online company. Google has experimented with stores in the past, but the stores were a showcase for the hardware and how the devices worked with the software. The new popup store will likely offer the same experience, but it could give Google an opportunity to experiment with beacons and other ad-targeting technology.

Today, if someone sees a search ad on a mobile phone in a store and goes home to buy the new pair of Nike shoes through Amazon Echo, Google has no clue that the transaction occurred. Sullivan said for marketers that's problematic because they don't know the return on the ad spend.

"The hardware will give Google a much better read on searches that lead to actions and how well they satisfy the needs," Sullivan said.