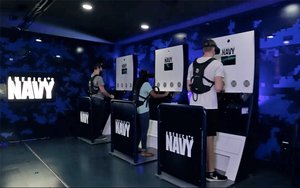 The U.S. Navy is updating its recruiting process by combining creativity, data and technology  to bridge actual Navy experiences with civilian expectations.

Developed with agency Wunderman Chicago, the “There is no Tech, Like Navy Tech,” concept introduces two high-tech combat simulation modules with immersive virtual reality experiences. This activation launched over the Columbus Day weekend during Fleet Week in San Francisco. Additional modules will be placed at a number of sites across the U.S.

The technology showcases what it feels like to be a part of today’s Navy by allowing participants to pilot a high-speed assault craft or experience a water extraction of a Navy SEAL team pinned down under enemy fire – all from the safety of a virtual reality module, says the agency.

Users are given customized RFID-branded dog tags at registration, which tracks and collects their data across every touchpoint. This builds a more robust picture of each candidate, allowing for a more personalized conversation with U.S. Navy recruiters, including matching potential recruits with the careers best suited for them.

“Virtual reality has allowed the U.S. Navy to come a long way as this display offers users the most realistic Navy experience possible,” says Doug "Woody" Beal, Navy Recruiting Command Deputy Commander Rear Admiral. “Where we were once only able to describe these experiences, we can now actually demonstrate a Navy mission in an interactive way, using the best technology available.”

Wunderman is the experiential marketing lead within the newly-formed agency team, The Navy Partnership, which also includes Y&R, VML, MEC, UniWorld and iostudio. The WPP-owned agencies signed a $457 million, five-year contract with the U.S. Navy in April. The account is serviced out of Memphis, TN.