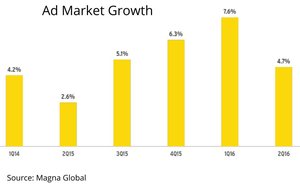 Interpublic research arm Magna has upgraded its U.S. ad revenue forecast and now predicts that media owners net advertising revenues will grow 6.3% to $179 billion in 2016, the strongest growth rate since 2010.

The research unit had previously forecast 6.2% growth for the region, but made the upgrade following a strong first half and despite lower political ad-spend expectations.

Not counting the incremental ad sales generated this year by political and Olympics, ad market growth would be 4.4%.

Digital advertising sales this year will equal TV ad dollars for the first time with both generating $68 billion, and a market share of 38.5%.

Social media ad sales are expected to rise 44% to nearly $16 billion, of which about $2.2 billion will be for social video ad formats.

National TV ad revenues are predicted to grow 3.2% this year, excluding political and Olympics, with growth slowing to 1.5% in 2017.