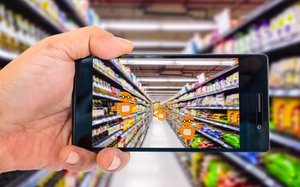 Augmented reality got a major boost from the wildly popular Pokémon Go and now it looks like it could get another one at retail stores.

A shopper could use augmented reality to help them picture a jacket or shoes in a variety of colors or provide a convenient way to read product information, for example.

It turns out that shoppers like the idea of using AR to explore and learn more about their prospective purchases, based on a new study.

The study found that most people would shop at a retailer more often if they offered augmented reality.

The study is based on a survey of 1,100 adult U.S. adult shoppers conducted by Interactions Consumer Experience Marketing.

To define augmented reality to the shoppers in the survey, Interactions included the following: “unlike virtual reality, which creates an entirely artificial environment, augmented reality allows users to integrate digital images into their view of the real world, in real time.”

Consumers can use augmented reality for a range of retail products. Here are the most popular, according to the survey:

The survey found that more than a third (34%) of shoppers already use augmented reality while shopping and nearly half (47%) of those like to use it both online and in a store.

An in a nod to the behaviors of Pokémon Go players, the majority (55%) of AR users say augmented reality make shopping fun.

Most (71%) shoppers said they would shop at a retailer more often if they used augmented reality and 61% said they prefer to shop at stores with AR over those without it.

Not sure about this one, but 40% said they would be willing to pay more for a product if they could experience it through augmented reality.

AR also may have some influence on impulse purchasing, since 72% of those who have used AR said they purchased items they weren’t planning to because of augmented reality. Almost half (45%) said it save them time and 68% said they spend more time at a retailer if they can shop with augmented reality.

Like many other consumer shopping surveys, deals are a factor here, with 41% of AR users saying they like to use its specifically to find out about deals and special promotions.

Now retailers have yet one more piece of connected technology to add into their IoT repertoire.